CRISPR/Cas systems and RNA interference pathways are adaptive and highly efficient systems that protect genomes against invaders such as phage or transposable elements. Understanding their genetic and mechanistic architecture provides fascinating insight into an ancient arms race and the evolution of genomes. It also gives a unique insight into the control of gene expression, into heterochromatin formation, and into the epigenetic inheritance of silencing information across generations. My group studies the piRNA pathway—an animal-specific RNA interference system that silences transposons in germcells and that is essential for genome stability. In animals ranging from sponges to humans, the piRNA pathway is a central transposon defense system. This remarkable pathway is able to discriminate cellular transcripts such as mRNAs from transposon transcripts and to very potently silence the latter. The piRNA pathway consists of three modules. First, at its center act Argonaute proteins from the PIWI clade. These are guided by small RNAs (piRNAs) to complementary transcripts. Target recruitment elicits potent post-transcriptional or transcriptional silencing. Second, sophisticated piRNA biogenesis machineries generate 22-30nt long piRNAs from longer precursors. It is at this step, where the cell needs to distinguish self-transcripts (mRNAs) from non-self transcripts (transposons). Third, the genome stores transposon sequences in defined heterochromatic loci called piRNA clusters. These provide the precursors for piRNA biogenesis and act as heritable silencing information. In stark contrast to other RNAi pathways, the mechanistic framework of the piRNA pathway is largely unknown. Via a genetic screen, we identified around 40-50 proteins with essential roles in the piRNA pathway. Our goal is to understand piRNA biology at the genetic and mechanistic level in order to reach a conceptual understanding of this fascinating genome surveillance system. 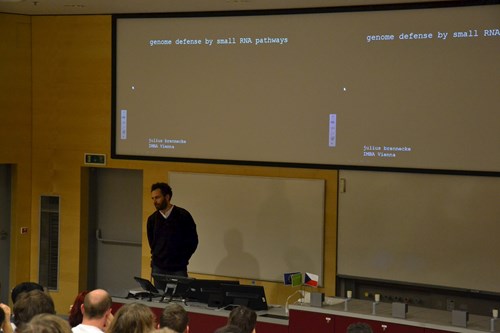 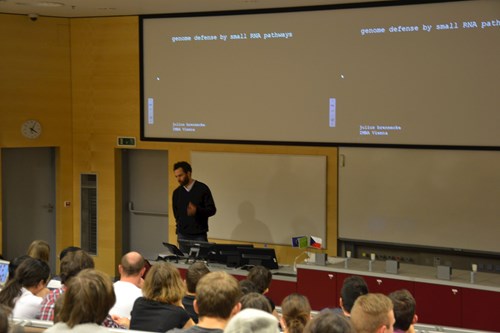