The European Mobile Laboratory (EMLab) consortium has set up three mobile laboratory units for diagnostics of pathogens up to risk group 4. The first unit was deployed to the Ebola virus disease (EVD) outbreak to Gueckedou, Guinea, in March 2014. It is still in operation in Conakry. The second unit, which was stationed in Nigeria, has been first deployed within Nigeria and then to Sierra Leone (August 2014–March 2016). The third unit belonging to Tanzania has been deployed to Liberia and Sierra Leone (September 2014–September 2015). Until now, EMLab has tested more than 22,000 samples from EVD suspected cases with about 3,500 samples being positive for Ebola virus (EBOV). Deployments were performed as partner of the WHO Global Response and Alert Network. Numerous research and public health institutions across Europe deployed their staff with the laboratory units. Within the framework of the European EVIDENT project, EMLab implemented a research program on virus evolution, immunology and pathophysiology of EVD, virus persistence, co-infections, and outcome determinants and supported vaccine and drug trials of WHO and other partners in the field. EMLab and EVIDENT were funded by the European Commission.

Prof. Stephane Günther (MD) is the Head of Department of Virology, the Biosafety level 4 laboratory, and WHO Collaborating Centre for Arboviruses and Hemorrhagic Fever Reference and Research at the Bernhard-Nocht-Institute for Tropical Medicine in Hamburg, Germany, and adjunct professor at the University of Hamburg. He studied medicine and specialised in virology, microbiology, and infection epidemiology. Dr. Günther’s research is dedicated to viral hemorrhagic fevers (VHF), including Ebola virus disease, Lassa fever, and Crimean-Congo hemorrhagic fever. 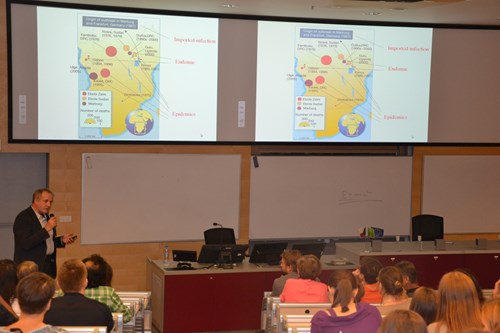 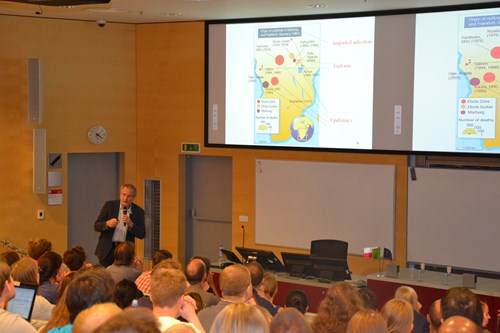