Species from outside of Europe and transferred to Europe within the last 500 years, are called alien to Europe. About 10’000 animal and plant species could establish in Europe and are recorded as alien. The main motor of the still increasing number of alien species is globalization with its continuous transport of people and goods all over the world. When an alien population grows and spreads, it can interfere with native species in many ways, e.g. by competition, hybridization or replacement. Often aliens introduce parasites or pathogens to which they are immune; however a close relative native is not. Alien species may alter the composition of communities and of ecosystem functions. Besides such environmental impact, aliens may also have a strong economic impact. When an alien species has such a strong negative impact on the native biodiversity, it is called invasive species. They are no enrichment but a threat to our native biodiversity. It is shown how the impact of invasive species can be quantified and it is also discussed how their impact can be reduced. 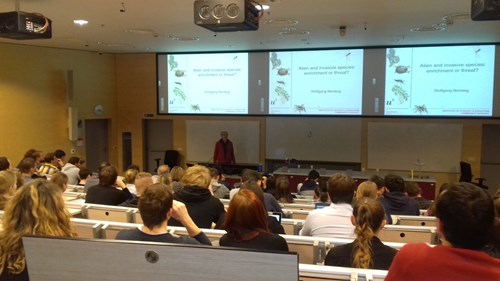